Every society has a belief in something belief in life, belief in death a belief in life after death. These beliefs are instrumental components of culture, and they influence the disposition of a community/people. These principles could be said to be a way to understanding “death” a phenomenon that has since plagued every man and seems unfathomable. It is also a way of understanding the cosmos and the role of death in life. The West African society though having a practice of dual religion still performs its African traditional belief system, one that is rooted in the existence of the ancestors through oral tradition. This traditional conviction is hinged on the philosophy of life after death, insinuating that death is not the end. Thus, this translates into the Masquerading culture earlier stated and practised by the Igbo’s.

What is culture? A specific way of life but to summarily say that the focal point of culture centres on values and not facts are untrue, whereas the African culture predominantly believes in the spirit of the dead. At festivals, the appearance of these said masquerades represents the ancestors of the land striking a balance in the cosmos to act as bridges between the living and the dead. A custom held dear and most valued in Igbo land, not just for the colour and fanfare it brings but for the depth of meaning of life and death and the roles that every being has to play as a community “I am because we are”. In the traditional setting, the masquerades perform judicial functions; settling disputes of land, marriage and family aiding without a doubt in structuring a pattern together with a belief in life after death.

Hence to Oruka (Oruka& Masolo, 1983, p57), culture is a people’s body of knowledge, beliefs, behaviour, goals, social institutions, together with tools, techniques and material constructions. In this sense, one can then see why certain cultures have the age of rite of right passage. Customarily, young men are to pass through a ceremonious stage that sees them becoming full members of the masquerading cult; being sworn to secrecy. Worthy of note is that this practice is gender-sensitive and done only by the male folk. This act of initiation thus establishes acculturation into the system of the cosmology of Igbo traditions.

Therefore, it is in this regard that the cyclical belief system of West Africa, of Igbo land and in masquerading is projected. 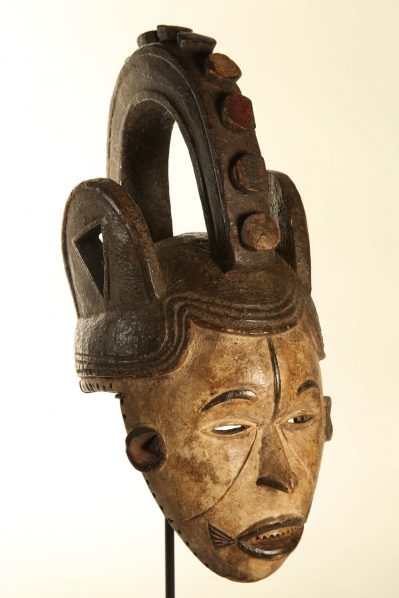 Despise the interruption by colonialism the African belief was not shattered as it lingers on, the values of life as being cyclical are illustrated in the belief of masquerades. They play various judicial purposes in society, acting as the watchman to earthlings. These ancestral spirits watch over their own and the community, warning the people of possible mishaps while sending out their punishment on the wicked. So they are seen to have powers that can influence the life of an individual given why everyone has a “chi”. These masked spirits are a representation of dead elders in another form (masquerades) who come out at special times like festivals to pass on wise words in the form of proverbs; “the palm oil with which words are eaten” to its people. In this belief, man does not die rather transcending into a higher realm of life; a philosophy of life held not only by the Igbo but a larger percentage of West African countries.

Like every other society, the Igbo society is patterned in unwritten precepts that guide their way of life like the philosophy of life and death which permeates the masquerading customs. This has formed the myths and legends of the Igbo people.

These supernatural beings are understood to represent deities of the land or dead relatives. They also used to perform ritual rites done at burials, new yam festivals and coronations. At some social gatherings, some masquerades are specifically known to surface solely for entertainment.

Masquerades are symbols and an embodiment of customs and tradition that is vital to the norms and the convention of the religious or social life of a community, guiding the society in a cyclical belief through the ancestral spirits.