Victorious Bones is Repurposing Trash Into Jewelry in Nairobi

Victorious Bones Craft Group is a collective that is at the forefront of collecting trash and repurposing as jewelry. The group is collecting old and fresh bones, brass, and horns, transforming them into jewelry, bowls, and trinkets.

Walking through Kibera – the largest urban slum in Kenya’s capital, Nairobi — air pollution and waste is the order of the day. Trash flows into the streets and piles up by the railway line, along the roads and side drains. But one local artisan collective has discovered a creative way of managing the slum’s waste crisis while tackling the issue of unemployment in the process.

Jack Nyawanga, alongside a friend, founded Victorious Bones Craft Group, a collective that is at the forefront of turning trash into treasure. This group is collecting old and fresh bones, brass, and horns, transforming them into jewelry, bowls and trinkets. 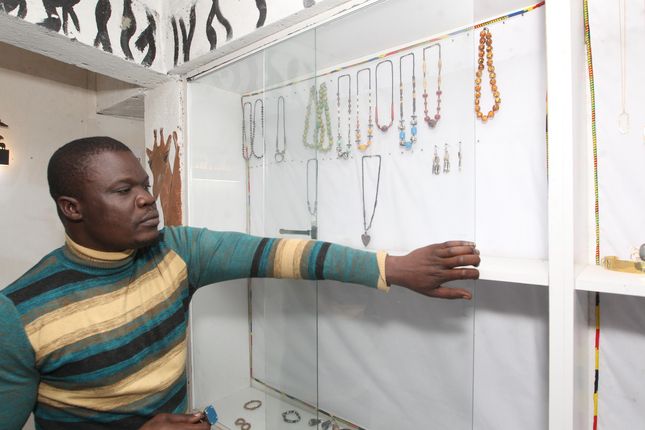 “We saw an opportunity with bones from the animals,” Nyawanga said.

According to Nyawanga, Victorious craft was founded to address various challenges that face Kibera, a home he has known since he moved to Nairobi when he was a toddler. Nyawanga, who was 18 when he started the venture in 2006, said residents would eat meat and throw the bones haphazardly. Butcheries and slaughterhouses also had habits of throwing fresh bones in the environment without any considerations. This lead to vultures scavenging the areas besides the flies. The situation was worsening and Nyawanga had to look for a quick solution. 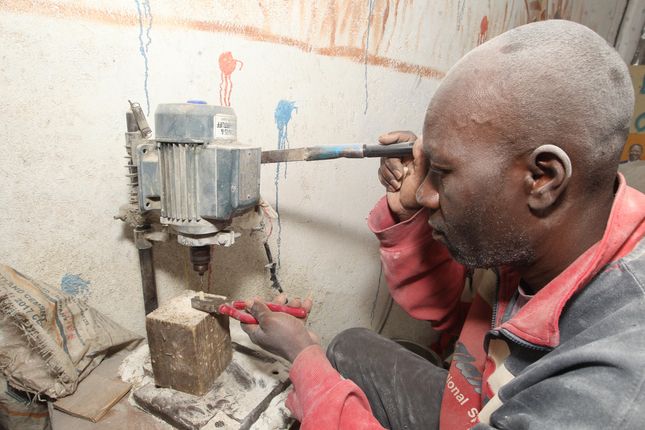 ​ Salmon Odongo working on a piece of jewelry.

“Kibera has been known for having a high rate of unemployment mostly amongst the youths and the environment pollution especially air. So, we came about with the idea to address these challenges,” Nyawanga told OkayAfrica. “We saw an opportunity with bones from the animals. We get these bones from the streets. We also buy bones from butcheries, and major slaughter houses within Nairobi and across the country. For the ones on the streets here in Kibera, we pay those who are collecting them for us.”

The group’s first piece was an elephant shaped key holder produced from a piece of bone. It was taken to Hilton Hotel International courier shop where it was sold, generating capital for the venture. It also encouraged them to make more items.

“We were now more convinced that our items would sell,” Nyawanga said. “We came back to make more without any capital, just an idea of collecting bones from the streets. we normally come up with ideas, we try the ideas on the market and we see if they sell. If they don’t sell we rethink our strategy.” 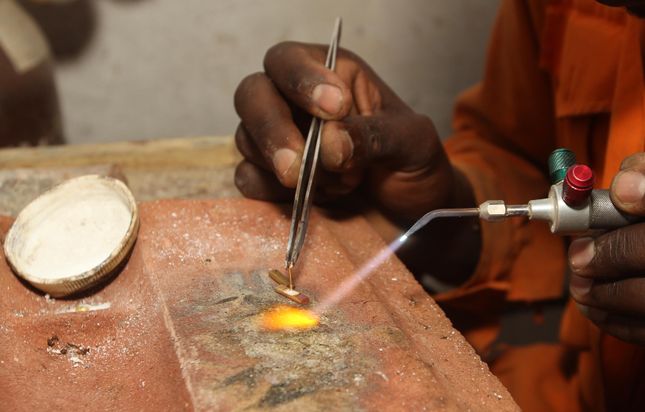 ​Odongo putting the finishing touches on a piece of jewelry.

The Victorious Bones journey has had ups and downs. Immediately after launching the venture, Nyawanga’s friend severed ties with him due to a lack of profits. Also, it was difficult for Nyawanga to secure new markets for his products, get the right tools to ease the production process and meet the demand of the market.

However, Nyawanga saw some relief when the Kenyan government — through the ministry of youth — came to his rescue with a loan of $300. In addition, the ministry, through its trade fairs and exhibitions, provided a platform for Victorious Bones to showcase their products enabling them to acquire new markets and clients. The International and local non-governmental organizations working in Kibera, too, joined hands with the collective to train their members on managing their skills, income and how they can contribute to their community. 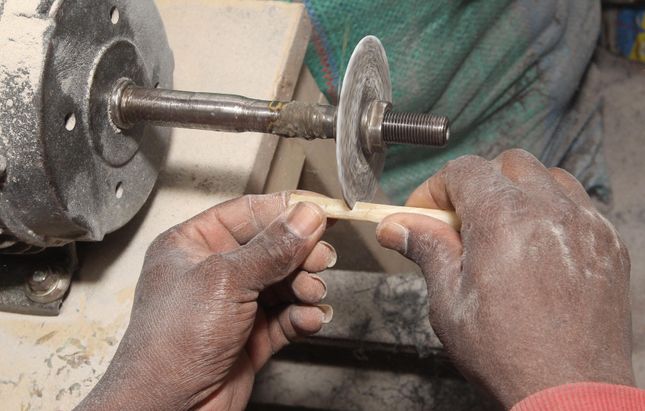 “Our creative ideas for our design come from the society we live in, nature, and the trending issues besides our clients,” Nyawanga said.

“We have trained, so far, 86 members of our community since inception. The young people today are also owning their own workshops recycling bones and making jewelry,” Nyawanga said. “We have also trained 60 refugees in the Dadaab refugee camp courtesy of the Swedish government. Today there is bone recycling in Dadaab refugee camp, one of the biggest refugee camps in the world. We recruit, then teach them the skills needed before they can become our worthy competitors.” 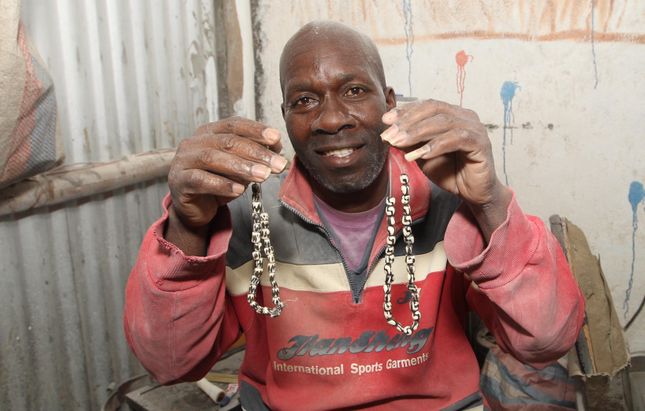 The venture also boasts of 12 creative designers and they are looking at scaling the number to 30. Initially, there were 16 but four could not bear the brunt of Covid-19. He further explained that apart from the jewelry, the collective do interiors where they decorate people’s homes using bones, horns, wood and metal. They also produce bottle openers and key holders.

“Our creative ideas for our design come from the society we live in, nature, and the trending issues besides our clients. We gather these ideas from different areas,” Nyawanga said. 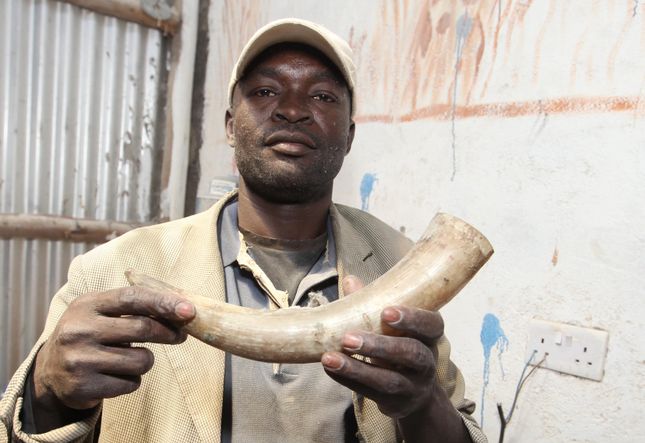 The group is collecting old and fresh bones, brass, and horns, transforming them into jewelry, bowls and trinkets.

The group has been teaching the community on environment conservation using various channels such as social media, radio, television and print media. This has resulted in awareness being carried out across the country. In fact, the collective receives a bunch of phone calls from the slaughterhouses and butcheries across Kenya to come and collect the bones. In Kibera, the group uses Pamoja FM, a community radio to sensitize the residents on the importance of disposing of bones well.

“You will not find any slaughterhouse throwing bones anyhow in the environment around Kenya,” Nyawanga said. “And it is because of us. ”

The prices of jewelry range from $5 to $15 with custom made jewelry costing $200 and above. It can take up to two days to make a design and designs are made every day.

However, Nyawanga says that they are more into making a difference than into making huge profits.

Brian Otieno, a designer and musician, joined the collective in early 2021. Despite coming as a trainee on brass and bone recycling, Otieno has never looked back. 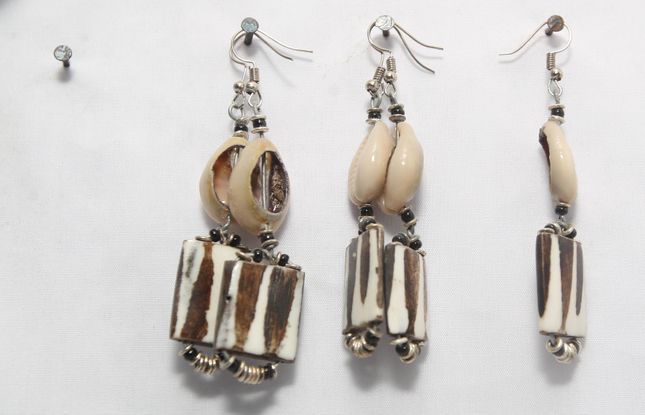 The prices of jewelry range from $5 to $15 with custom made jewelry costing $200 and above.

“I just came and since Jack-the founder is a designer and musician, we connected so fast. Jack and the team started nurturing me on how to recycle the bones. I was given some samples of the jewelry and I made them successfully,” Otieno told OkayAfrica. “Before I joined Victorious Craft, I was staying with my brother. But right now I am able to pay my own rent. I pay school fees to my brother.” 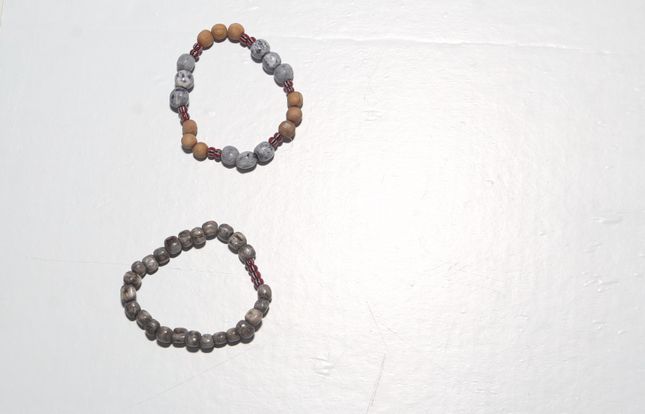 It can take up to two days to make a design and designs are made every day.

Lilian Atieno, a designer who’s been with the group since 2006, says Victorious Craft has changed the outlook of Kibera and has trained many youth in Kibera. She also notices a notable difference in the neighborhood.

“Initially, you wouldn’t be able to come to Kibera, as a visitor because the youths would have mugged you. People would eat meat and throw bones haphazardly, some bones would prick you,” Atieno said. “Today you can walk in Kibera without hiccups. The environment is great.” 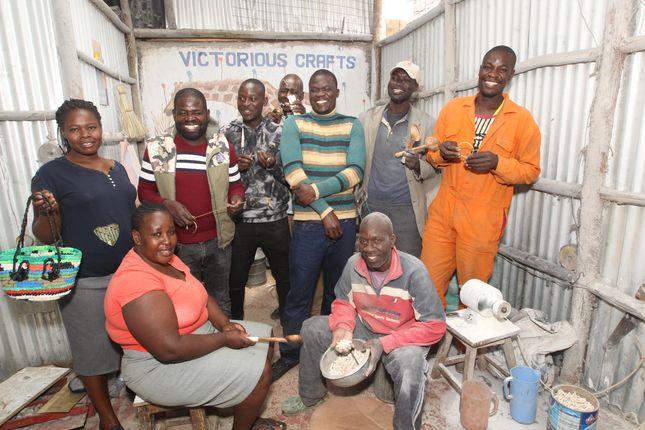 “You will not find any slaughterhouse throwing bones anyhow in the environment around Kenya,” Nyawanga said. “And it is because of us.”

A Quick Guide to Fufu, an African Staple Food