When Gold West Africa launched, in June 2019, a conference to develop the West African gold economy, bringing Nigerian, regional and international gold stakeholders together, there was no doubt that it would return in 2020 for its second edition.

In 2020, the conference has returned, but with expanded scope and presence in other West African countries.

No longer just a conference event, but also a gold renaissance celebration, with festivities such as markets and an art show and auction to bring role-players, policymakers, stakeholders, investors, jewelry makers, goldsmiths and even artists together, whether in real time or digitally, as a way of reflecting the pivotal importance of developing the region’s gold value chain.

This year, there was a creative addition to the popularly celebrated Kano Durbar Festival — the Gold Durbar.

With Worth The Weight Of Gold: The Language Of West African Culture (The Kano Series) as theme, the exhibition showcased the objects and ideas that celebrated West Africa’s historic and under-recognised global significance.

Holding at the Ado Bayero Mall in Kano, the Gold Durbar is a curated marketplace for trading and purchasing gold jewelry as well as showcasing inspired design and lifestyle products.

The show, which began on August 1, 2020, ends on August 22, pays tribute to Kano’s rich cultural heritage while integrating economic development and tourism through the corridor of gold in history and for commerce in Northern Nigeria.

Nigeria And Kano Series
Another market in Ouagadougou, Burkina Faso at the end of September, this time serving as a meeting point for artisanal gold producers with jewelers and traders. November sees the culmination of the gold festivities with Gold West Africa Conference and Gold House art exhibition and auction in Lagos.

In Kano, the Sabon Gari market was the first place where mostly women who served as brokers, working from home with more than 2000 distinctive visitors daily from across Africa, conducted conventional business in precious stones. Other markets in Kano where gold is sold include the Rimi and Hajj camp markets cementing Kano’s position as the main gold market in Nigeria by sustaining the gold ecosystem and economy with its boom in business.

Kano had grown very rapidly in the 15th century, sending out military expeditions to the south and becoming a regional hub linking trading networks from southern Nigeria to what is now Mali and beyond. The characteristic wealth of the region has firm links between culture and gold. 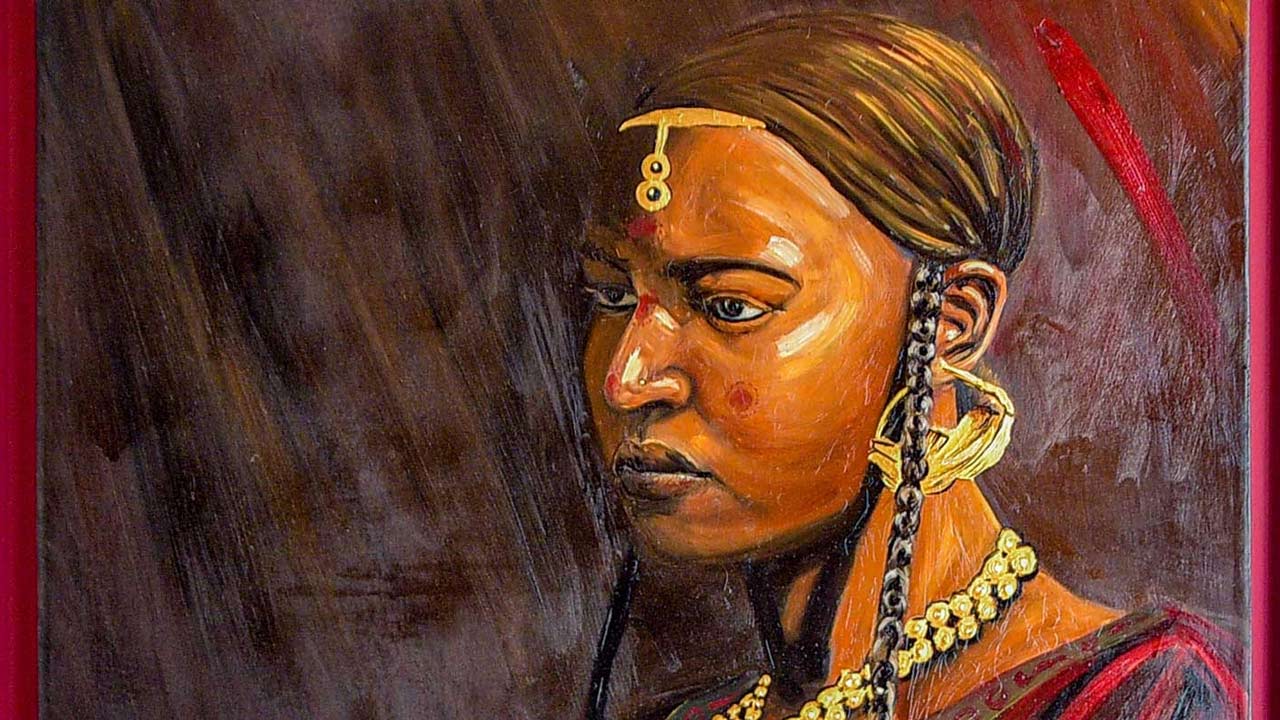 To do justice to the the Kano Series, Sadi Washington, a multidisciplinary visual artist working in various mediums, interrogates the elements, forms, style and contextual relationship between art and commerce.

His passion for facial expressions and moods embroidered with stories is reflected in the works.

For the exhibition, he presents artworks spanning a lot of centuries and a vast geographic expanse. The exhibition featured stories about interconnected histories.

He takes his visitors along routes crossing the Sahara Desert to a time when West African gold fueled expansive trade and drove the movement of people, culture, and religious beliefs.

Sadi uses what archaeologists have termed ‘the archaeological imagination’— the act of recapturing the past through surviving traces— to present a critical rethinking of West Africa’s romance with gold, the Great Mansa Kanka Musa of Mali, reputed to be one of the richest human beings to ever live, and his wife, Inari Kunate, the queen of gold.

Here, rare and precious archaeological fragments are seen side by side, bringing new understanding to complete works of art from the period of Mansa Musa when he travelled from Mali to Mecca in 1324.

In West Africa wearing gold, a scarce and valuable material, demonstrates power and prestige, taste and fashion and Inari was the custodian of such values in her creativity with fashion and jewellery. Gold from West Africa was the engine that drove the movement of things, people, and ideas across Africa, Europe, and the Middle East in an interconnected medieval world.

As the incredible works in this exhibition show, it is not possible to understand the emergence of the early modern world without this West African story.

Medieval Africa begins with the spread of Islam in the 8th century C.E. and recedes with the arrival of Europeans along the continent’s Atlantic Coast at the end of the 15th century.

As professional painter, who is able to paint on anything he finds around him and using any medium available, Sadi’s works juxtaposes gold’s visual beauty with the unsettling form into which it has been cast, referencing the relationship between heavily embellished tapestry of images.His strokes are mature and outright revealing.

Sadi tells the story behind West Africa’s romance with gold. “At a point in time West Africa was one of the world’s greatest producers of gold. A succession of great African empires rose off the back of the gold trade as salt, ivory, and slaves were just some of the commodities exchanged for the precious metal that eventually found its way into most of southern Europe’s gold coinage. 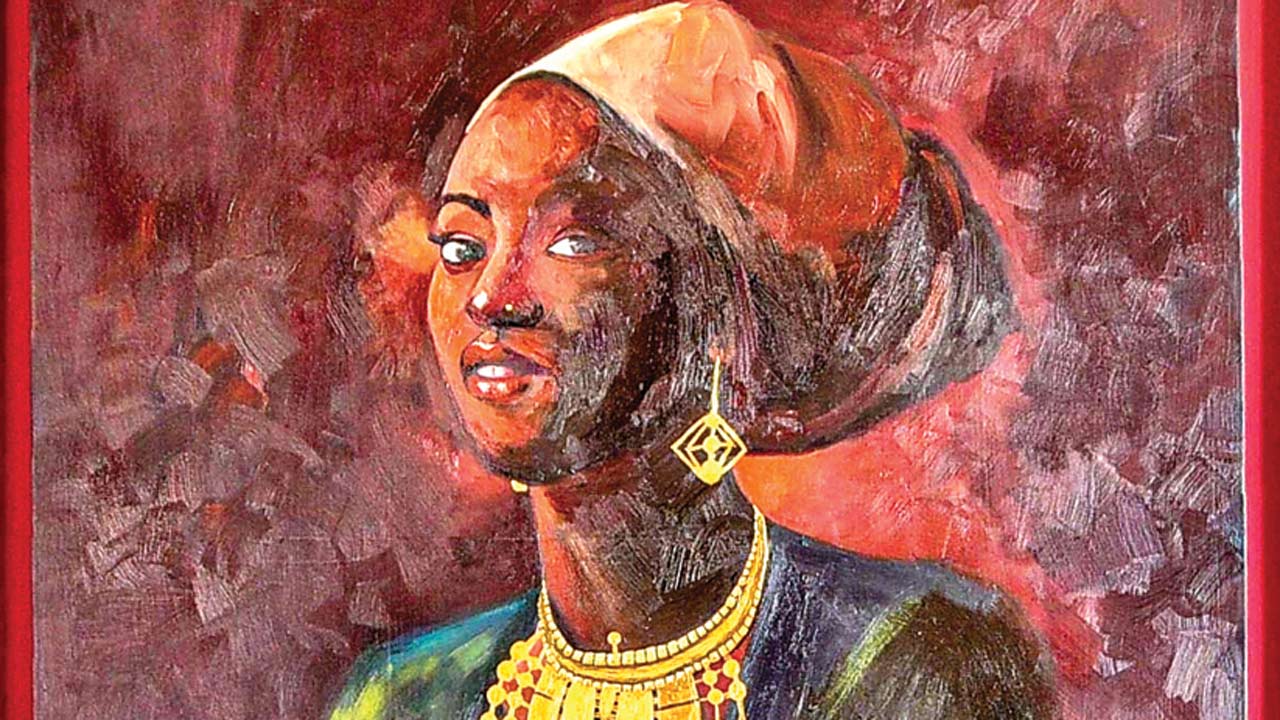 “For more than 1,500 years, gold determined the political economy of West Africa and determined its relations with the outside world. This West African gold powered the global economy centred on Europe and the Indian Ocean prior to the discovery of gold in the Americas. West African gold, dug by agriculturalists, underwrote the caliphates of North Africa, Arabia, Asia and Southern Europe following the Islamic conquest. The lure of West African gold powered the voyages of exploration emanating from the Iberian Peninsula,” the programme brochure noted quoting Sada Malumfashi.

According to the exhibition organisers, “our objective with each of our initiatives is to develop a sustainable and empowered gold value chain in West Africa. This ranges from being able to harness capital for gold exploration, production andtrade to understanding how gold is part of local culture andtraditions; that there is a significant consumer market for gold jewelry or savings products, to finally integrating gold into an ecosystem where there is economic impact and benefit.”

Out of the 15 ECOWAS countries, Cape Verde, Benin, and Togo are the only countries without notable gold reserves. However, Benin and Togo are notable for the gold trade.

During this era, the Sahara Desert was the center of a global network of exchange. As networks spread, so too did cultural practices, fostering the broad circulation of distinctive Saharan aesthetic and intellectual traditions connected to Islam. The reach of trans-Saharan exchange is revealed in the fragments excavated from archaeological sites, now uninhabited, that were once vibrant communities.

Sadi studied creative arts at the University of Lago. He has been practicing art since 2012 and has worked with masters who have carved a niche for themselves.

He is inspired by and finds joy in the day-to-day life of humans. The words of his grandmother inspire his artistic practice: “If you want to be a fish, be a big fish.”