The Women Of Ndebele: Art And The 3 Stages Wedding Ceremony

The women of the Ndebele are often the tradition carriers and the main developers of the world renowned wall art of their home.

The Ndebele people are descendants of the Nguni tribe, one of the four major ethnic divisions among Black South Africans (the others are the Sotho, Shangaan-Tsonga and Venda).

The Art
Mural painting known as ukugwala is done by women and their daughters which entails the multicolored application of acrylic paint on the entire outer and inner courtyard and house walls. This skill is passed from mother to daughter and is done by hand without the aid of squares or rulers. While the entire exterior of the house is painted, the most intricate and colourful designs are saved for the front of the house. The vibrant symbols and expressions portray communications of personal prayers, self-identification, values, emotions, and marriage.

These colourful patterns can also be found in women’s fashion. After an Ndebele woman marries, her fashion and accessories become more colorful and extravagant, reflecting her growing status in the community. Women wear brass rings—called idzila—around their arms, legs and neck after they are married. The rings symbolize a woman’s faithfulness to her husband and are believed to have strong ritual powers. 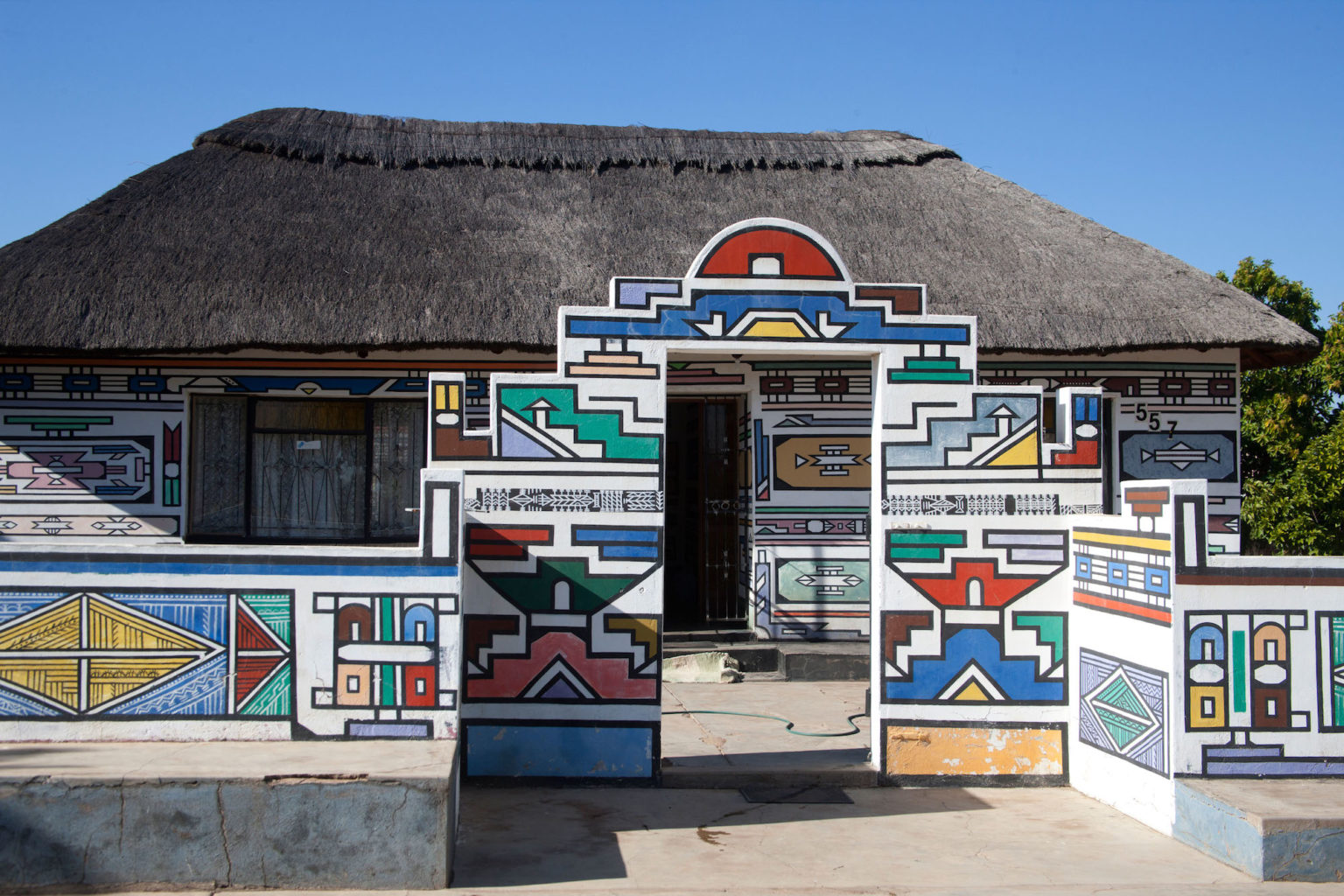 The Ndebele’s distinctive designs have gone on to influence designers the world over. French footwear designer Christian Louboutin, for instance, designed a pair of stilettos using motifs from Ndebele culture. Esther Mahlangu, an internationally recognized Ndebele artist, has had her work commissioned by BMV and South African Airways. In 1991, she painted a BMW 525i in the traditional style of Ndebele mural work.

Marriage
The Ndebele wedding ceremony is celebrated in three stages, and can take several years. Marital negotiations between the two sets of families are an extended process that includes, the first stage is Labola for the bride; this is paid in installments with both money and livestock; the second stage, a two-week separation of the bride during which other women teach the bride how to be a good wife and the third stage is completed when the bride has her first child.

The groom-to-be sends a letter to the bride’s family to request a date for the Labola (bride price) negotiation. He then has to purchase a sheep, some blankets, a broom and a few clothes for the girl’s family. The groom’s parents then visit the bride’s parents and pay the Labola, after this they take the girl to the man’s family for familiarization.

Preparation for the wedding day will include writing up a guest list and sending out of the invitations, this happens two weeks before the wedding day. Food is cooked the traditional way which must include ‘mielie pap’ (traditional maize meal) meat and salads, fruit, sweets and cakes.

Right before an Ndebele wedding, the groom’s mother usually makes a Jocolo, (a special apron made from goatskin decorated with beautiful colorful beads). This special garment is worn by all the married women during the wedding ceremony, as it represents a mother being surrounded by children.

The official ceremony will take place at a designated location with family members present to witness the couple saying their wedding vows and the placing of rings on each other’s fingers. After the religious ceremony the couple will change into traditional attires and go with the guests to the new bride’s home to eat after which gifts will be given to the newlyweds.

Owing to Christian elements, wedding vows have become part of the marriage rites and involve the placing of rings on each other’s fingers. After the religious ceremony the couple revert to traditional clothing and together with guests head to the bride’s home for meals after which gifts are presented to the newlyweds. The new wife is also given an Ndebele name.

The wedding is considered successful as soon as the new wife puts to bed.

The Techpreneur On The Money

Inside an African startup acquisition with Parcelninja’s Justin Drennan