The Story Of The Fearless Women Warriors Of Dahomey

No tale about the Kingdom of Dahomey is complete without mentioning the women that contributed to its military might.

From the 18th century to late 19th century, there existed a formidable army of all-female warriors in Dahomey in the present-day Republic of Benin. They were called the Mino (our Mothers) or Ahosi (king’s wives) while European observers called them the Dahomey Amazons due to their similarity with the Amazons of the Greek mythology.

The origin of the Amazons is quite unclear. An account attributed it to King Houegbadja (who ruled from 1645 to 1685), the third King of Dahomey. Houegbadja is said to have originally started the group which would become the Amazons as a corps of elephant hunters called the Gbeto.

Another account claimed that Houegbadja’s daughter Queen Hangbe (ruling from 1708 to 1711) established a group of female royal bodyguards. According to tradition, her brother and successor King Agaja successfully used them in Dahomey’s defeat of the neighbouring kingdom of Savi in 1727.

However, it was under the rule of King Ghezo (ruling from 1818 to 1858) that the Amazons became an integral part of the Dahomean military. Ghezo was known for his military reform. He placed great importance on the army, increasing its budget and formalising its structure from ceremonial to a serious military. In the mid-nineteenth century, the number of women soldiers of Dahomey was estimated at several thousand accounting for 30–40 per cent of the army.

Ghezo recruited both men and women soldiers from foreign captives. Although women soldiers were also recruited from free Dahomean women, some enrolled as young as 8 years old. Some women in Fon society became soldiers voluntarily, while others were involuntarily enrolled if their husbands or fathers complained to the king about their behaviour.

Membership among the Mino was supposed to hone any aggressive character traits for the purpose of war. As members, they were not allowed to have children or be part of married life (though they were legally married to the king). Many of them were virgins. 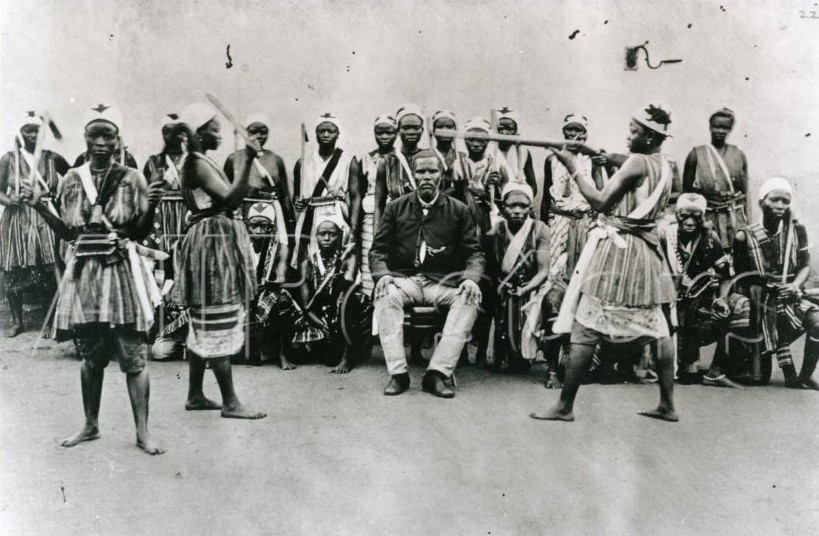 The Mino trained with intense physical exercise. They learnt survival skills and indifference to pain and death, storming acacia-thorn defences in military exercises and executing prisoners. Discipline was emphasised.

Jean Bayol, a French naval officer who visited Abomey in December 1889, watched as a teenage recruit, a girl named Nanisca “who had not yet killed anyone,” was tested. Brought before a young prisoner who sat bound in a basket, she:

“walked jauntily up to, swung her sword three times with both hands, then calmly cut the last flesh that attached the head to the trunk… She then squeezed the blood off her weapon and swallowed it.”

Serving in the Mino offered women the opportunity to “rise to positions of command and influence” in an environment structured for individual empowerment. The Mino were also wealthy and held high status. Gezo’s female troops lived in his compound and were kept well supplied with tobacco, alcohol and slaves–as many as 50 to each warrior, according to the noted traveller Sir Richard Burton, who visited Dahomey in the 1860s. And “when amazons walked out of the palace, they were preceded by a slave girl carrying a bell. The sound told every male to get out of their path, retire a certain distance, and look the other way,” wrote Stanley Alpern, an author of a study of them.

The women’s army had three main wings: the right and left wings, and the elite centre wing or Fanti. Each of these wings had five subgroups: Gbeto (Huntresses) originally a corps of elephant huntress; Gulohento (Riflewomen) – they each had a long rifle and a short sword and were formidable fighters in close combat. Some were armed with spears and short swords; Nyekplohento (Reapers) – the reapers were few in number but particularly feared. Their razor-sharp knives, which could slice a man in two with a single blow; Gohento (Archers) – were experts in handling bows and arrows. Selected from the ablest young girls, their hooked and poisoned arrows rarely missed their targets; Agbalya (Gunners) – they were involved in the use of the army’s artillery, including old seventeenth-century iron guns and German Krupp guns sold to the Kingdom of Dahomey by Europeans.

The amazon women were largely instrumental in the wars against neighbouring kingdoms, often taking captives for the slave trade.

Yet, they suffered a number of defeats. Notable were the unsuccessful invasion of Abeokuta – the capital of the Egbas – in 1851 and 1864. As well as the first and second Franco-Dahomean wars. The French conquered Dahomey in 1892 and were particularly ruthless toward the Amazons, executing many of them partly because they noted that the women warriors provided the last resistance to their conquest of the state.

The courage of the fearless female warriors of Dahomey earned praises from even their enemies. A French Foreign Legionnaire named Bern lauded them as “warrioresses… fight with extreme valor, always ahead of the other troops. They are outstandingly brave … well trained for combat and very disciplined.”

P.S: The Dora Milaje in Black Panther was loosely on the Dahomey Amazons.

Mateo Founder On The Relationship Between Progressive Moments And Small Businesses

Reading for the End of the World