The Sambian people of Papua New Guinea practice one of the most bizarre cultures known to westernisation. So bizarre was this culture that a cultural anthropologist, Gilbert Herdt, described their ritual act of initiation as “ritualised homosexuality.”

For clarity, the people of Sambia do not think of this as homosexuality but a ritual to attain male development. To them, this ritual is necessary to attain the status of a “warrior” compared to the weaker gender.

Once they turn seven or nine, they are taken away from their mothers. This process allows for the detachment of the boys from their mothers who it is believed to have contaminated blood. Women are also said to possess powers (tingu) that make them easily manipulate men. The woman’s tingu is reinforced every time she undergoes her menstrual circle. As such, there is a need to deliver these boys via a blood-letting ceremony.

The blood-letting ceremony involves beating the boys with long sticks on their nostrils until they bleed. That way, the woman’s tingu is completely got rid of.

Once they pass this stage, his father and kinsmen look for a wife for him. He has to wait until she has her first menstruation. While he awaits this, he is trained to disassociate himself from satisfying the woman fully because she might make him fall ill and die. When they marry, she must fellate him before sexual intercourse.

After he has relations with her, he undergoes another nose bleeding to purify himself of her illnesses. It is only after she gives birth they stop this process and can be respected as warriors and full-grown men.

This tradition is kept as a secret by the male cult. Revealing it to his wife means castration and death. More so, moving beyond this to engage in homosexual activities hardly occurs as they maintain strict heterosexual relationships. 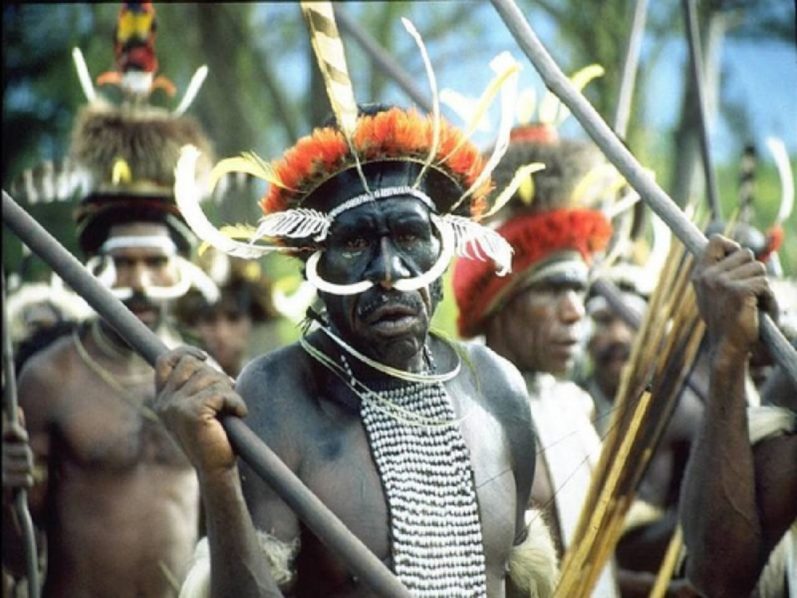 A Sambian man at the first stage of initiation | photo – Youtube

However, in the 1960s, things began to take another turn. As migration began and men sought to work on cocoa and rubber plantations, the desire for initiation decreased. By the 1970s, western missionaries and traders arrived and introduced western education. For the first time in Sambia, women and men would come together under one building with no male or female distinction to receive an education. As Herdt put it, “schools began to displace initiation as a primary means for gaining access to valued positions within the expanding society.”

The missionaries also condemned the practice of Shaman, polygamy, and some initiation processes. However, nose-bleeding is practised in some families to date.

But with this came exposure to alcohol, prostitution and fast money.

Then in the 1990s, a concept known as “luv” marriage came into play. Luv marriage meant that women were no longer seen as possessed by evil or having evil powers but as equals, thus giving rise to romance.

So widespread was romance in Sambia that Herdt wrote about the sexual revolution in his work: The Sambia: Ritual, Sexuality, and Change in Papua New Guinea (2006), “To go from absolute gender segregation and arranged marriages, with universal ritual initiation that controlled sexual and gender development and imposed the radical practice of boy-insemination, to abandoning initiation, seeing adolescent boys and girls kiss and hold hands in public, arranging their own marriages, and building square houses with one bed for the newlyweds, as the Sambia have done, is revolutionary.”