The Power of Social Media and The African Diaspora

Africans across the world organized themselves into becoming reliable resources for African students stranded in war-torn Ukraine to depend on – as their home embassies suggested “staying calm”.

While the world came to the aid of war-torn Ukraine, African students stranded across the Eastern European country have been forced to fend for themselves and organize via social media and texting apps.“Sit tight, and stay calm,” – arguably one of the worst things to hear when facing a life-threatening event. And yet, this is the extent of the advice afforded to the students by their home embassies in the wake of the Russia-Ukraine conflict, last month. But, as the world watched in horror with each panicked tweet, like, and share circulated on our screens, Africans living across the globe did not hesitate to recognize the gravity of the circumstances and act accordingly, coming to the aid of the students — some as young as 17-years-old.

Within hours of Russia’s invasion of Ukraine on February 24, #AfricansInUkraine was trending across the global Twitter village. Students, family members, and Africans across the diaspora attempted to share resources and Twitter played a major role in making that easy and possible.

Criney Insalata, a Zimbabwean born-London-based TEDx speaker, curator, and business owner, found out about the Russian invasion through Facebook. “I saw a video clip online. It made me so mad and I was just really shocked at the treatment of African students,” Insalata said. “There was a little kid trying to get on the bus or on a train, and she was pushed away by the military holding guns. That really upset me.” Insalata had no kin or ties to the situation unfolding in Ukraine but simply acted on her desire to reach out to and help the struggling individuals that look like her. Through Insalata’s professional and international connections, she managed to orchestrate the safe transporting of dozens of African students to bordering countries, as well as raising funds for students – even using her own money on numerous occasions. “I have a 19-year-old daughter and I would hope someone would do the same for her,” the BOBOU creator said.

Insalata lived in Eastern Europe for a decade and had a good understanding of the racism that the students and people of color would be exposed to. “Ukrainians have a duty to protect their citizens, so of course, they prioritize Ukrainians first and then Europeans,” Insalata said. “Anyone who doesn’t look like a European or Ukrainian is just, sort of, left to fall between the cracks. They’re not necessarily the target of the Russian military and they’re not the responsibility of the Ukrainian government. So they’re just left.” Insalata’s understanding of Eastern Europeans made it a no-brainer for the businesswoman to get involved, “ [Ukrainians] have been welcomed with open arms and people opening up their homes saying, ‘We are brothers and sisters come into my home. I would look after you.’ But the same isn’t happening to young African students that are traumatized. No one wants them. It’s the sad fact. Having said that though, Ukrainians, Poles, Germans, and some Danish people have that have driven down to border towns in Hungary, in Poland to pick up African students,” she says. 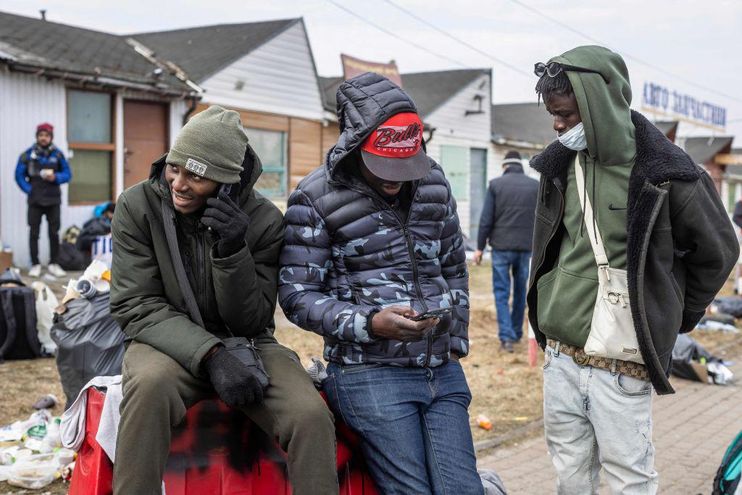 “This is not just Black African students,” Insalata continues, “There are over 15,000 Indian students in Ukraine. You have middle Eastern students, Vietnamese, Asian students, all of these people that aren’t strictly European or that aren’t, quite frankly white. They’re just out of mind.” Co-creator of newly formed collective Diaspora Relief Funmi Adeleye-Oladejo‘s circumstances are similar to Insalata’s — as Oladejo’s involvement was not based on personal relationships, but rather the personal tie to the community at large. The Nigerian-American Project manager and Project Hope founder, and her coalition conducted negotiations with the Red Cross and the Ukrainian government, managed to orchestrate the evacuation of over 300 Black foreigners trapped in Ukraine. “We organized the transporting of students — around the ages of 17,18 and upwards — and once they reached Budapest we contacted the Nigerian embassy there to house them for at least two days. The journey took over 24 hours because roads and railroads were damaged in the fighting.” At present, Diaspora Relief is focused on evacuating students still trapped in the Russian bordering city Kherson, as Russian troops have surrounded the city.

In Africa, those sworn in to protect and serve their constituents have a history of being the last to offer a helping hand. Thus making it easy for Africans with access to relevant resources to feel pulled to get involved — because if not us, who?

While the initial response from a majority of the African embassies representing the students abroad was dismal, some officials have met the students where they are, and created channels of communication with student leaders or representatives to ensure safe transportation from Ukraine to the border countries Poland, Romania, Belarus, and Slovakia. Various officials took to Twitter spaces to disseminate information within their respective nations. Others created WhatsApp groups specific to the targeted groups (students, family of those abroad, and media personnel). Additionally, the hoards of students who have successfully made it out of Ukraine were granted visas and the correct travel documents relatively early — though racism-related interference delayed the processes greatly.

Another organization created to bring aid to distressed students is Black Foreigners in Ukraine. The global collective of volunteers were the first to consider donating to students through cryptocurrency, as ATMs and banks either shut down or only allowed withdrawals through Ukrainian bank accounts.” It is amazing to see what we can achieve through technology even in the time of war,” said BFU member Glory Attaochu in a press release. Attaochu has become known for her voice as she has led countless Twitter Spaces dedicated to sharing the atrocities of the students’ experiences on the ground in Ukraine. On how the organization came to be, Attaochu explains, “Many of us learned about discrimination at the borders and in Ukraine on social media — but especially Twitter Spaces. They are what brought, what would become BFU, together. We never would’ve imagined it would become a platform for resources and connecting with Black and African students and refugees escaping war.”

One of the most shocking aspects of the Russia-Ukraine war is sitting with the reality that we are watching a war unfold — on the internet. The stuff of history, studies, and horrors that we only imagined to be stories is happening before our very eyes — and there is a great deal of hopelessness that plays in. To see Africans have to battle surviving a war while facing prejudices and being oppressed all at the same time is overwhelming, to say the least. African officials simply did not act in time or with enough urgency, and how lucky are we that the right people did.

Top Opportunities: Investing In The Educational Sector In Africa