The Mystery Of The Osun-Oshogbo Grove: Romance Between Nature And Culture

The historical antecedent of “Oshogbo” tells the story of a hunter who saved his people from famine and slavery, turned to the river Osun goddess for help, would later establish a community along the bank of the river and which would develop into a full town.

Over the years, Oshogbo has become that landmark centre for the growth of traditional arts and craft in Yoruba land. The town is famous for its traditional craft of ‘Adire’ or Tie and Dye this is why the town is fondly known as ‘Osogbo-iluaro’. Due to the special indigenous ways the “Adire” is made, it has become the trademark of the town.

Beyond the town’s attractive ‘Tie and Dye’, many other forms of art and craft can be seen around Oshogbo: carvings, bead-making, calabash and gourd making, traditional drum making and not also forgetting art performers, as well as other forms of traditional entertainment and style.

At the outskirts of the town lies the Osun River; home of the sacred site of the Osun goddess; the goddess of fertility, fashion, style and healing. Osun was one of the wives of the Alaafin of Oyo; Sango who later hanged himself and attained the deity status through the worship of his followers. Historically, the Osun River was a source of defence and salvation for the Yoruba people in that region during the invasion by the Fulani/Nupe slave raiders in the 18th/ 19th century.

Around the river lies 75 hectares of undisturbed forestry which combine its green lush area and the Osun River into a grove that became a UNESCO World Heritage Site in 2005.

The forest area of the Osun River has always been a sacred area that attracts Osun devotees and traditional worshipers as they gather to worship the goddess in a yearly festival of rites, traditional rituals, worship and festivity. The sacred grove was left unkempt and in a bad state due to poor maintenance and supervision until an Austrian artist by the name Susanne Wenger and her husband Ulli Beier arrived there. Wenger introduced a robust form of art that created the series of transformations and artistic development that bequeathed sustainability and reawakened a sense of belonging and appreciation to the sacred forest area. 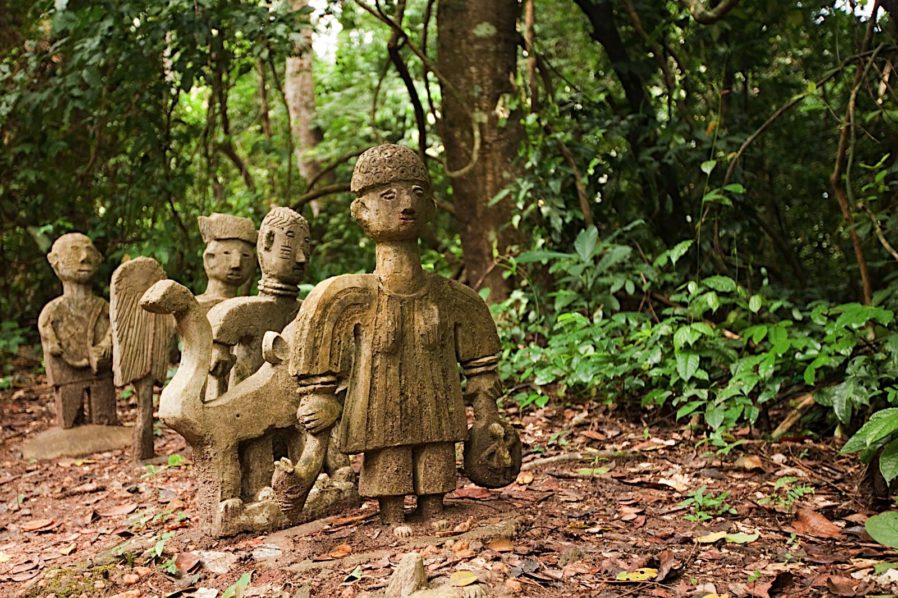 After her preliminary visit to Oshogbo, the Austrian artist became drawn to the river and its aesthetics, so much that she decided to stay and revive the dilapidated grove and also encourage some of the people living and working around that region to join her quest for sustainable art development.

Around 1958, she formed the ‘New Sacred Art’ Movement. This movement brought together different people from various works of life to form a coalition of art enthusiasts who drew their inspirations from Yoruba culture, mythology, folklore and traditional way of life to create a diverse series of art in rebuilding the Osun-Oshogbo grove; but most importantly creating bodies of works that would later revolutionize the Nigerian art sector, till today.

The arrival of Susanne Wenger at the Sacred Grove was a long-awaited fulfilment of a prophecy, and with the help of the traditional priest and local craftsmen in the city, she rebuilt the entire area of the sacred grove. The brilliant, mind-blowing artworks that adorn the grove were inspired by nature and the alluring inspiration drawn from the ‘Osun’ river. The Austrian artist would later become the “Adunni Olorisha” a befitting title that accommodates her position as an Initiate of the Saponna cult and also a high priestess of the Osun cult.

The Osun-Oshogbo Sacred Grove is one of the vast undisturbed areas of land in Africa. Fishing, farming and hunting are forbidden on the 75 hectares of sacred land. The sacred forest captures the potency of Mother Nature in her fullest glory. This is evidenced by the rare species of antelopes, monkeys and other exotic animals that can be seen strutting around the grove, enjoying occasional visitors who come to see the artistic beauty and also enjoy the traditional splendour of the sacred forest.

The Sacred Forest is one of the few spots in the country where well-preserved, undisturbed forestry lies side by side with strong cultural and traditional values.

The mystery of the Osun-Oshogbo Grove is captured in the brilliant legacy Susanne Wenger left us; and more than that, the blueprint that she created years ago is being carefully preserved by her adopted children, and the school of artists she trained. Constant restoration and preservation of the sacred grove is championed by the ‘The Susanne Wenger Adunni Olorisha Trust’, an NGO saddled with the responsibility of looking after the legacy of Susanne Wenger.

More than it being a sacred grove, the Osun-Oshogbo grove is an environmental testimony that nature and culture can exist side by side if the right tools and dedication for such romance are encouraged and nurtured.