The Importance Of Drums In African Tradition

Drums are a very essential member of the percussion group of musical instruments. They are normally played by beating with the hand, or with one or two sticks with or without padding. Depending on the class of drum and the type of sound expected, various sticks can be used. They could be wooden sticks, brushes or even sticks with a soft beater of felt on the end. On the surface, they appear like instruments that are solely used for music and eventually, entertainment and for evoking happiness.

However, there’s more to drums, especially within African culture and tradition. African drums have a unique and more profound symbolic meaning when compared with western music. Traditionally, these drums represent the soul of the community they’re found in. They are used for celebrating ceremonial events and rituals within the community. They are also employed as tourist attractions in various African countries, promoting and exhibiting African heritage and culture.

Depending on the place, the importance of these drums changes. Here are some popular African drums and how they’re regarded in their various communities:

Karyenda
The Karyenda comes from Burundi and used to be the main symbol of the country. It also represented the Mwami (King of Burundi) and had semi-divine status. It is believed that the Mwami could interpret the beatings of the karyenda into rules for the kingdom. As expected, these drums were sacred and were mostly used in rituals, major events for the king, such as royal coronations. They were also used at funerals, and weddings were announced through the drums. The beating of the drums also signalled certain rites, such as when the mwami rose in the morning or retired in the evening.

These drums were normally kept in drum sanctuaries, guarded by the Hutu families, who were the only ones the king allowed to manufacture, play, and keep the drums or bring them to court for an occasion. 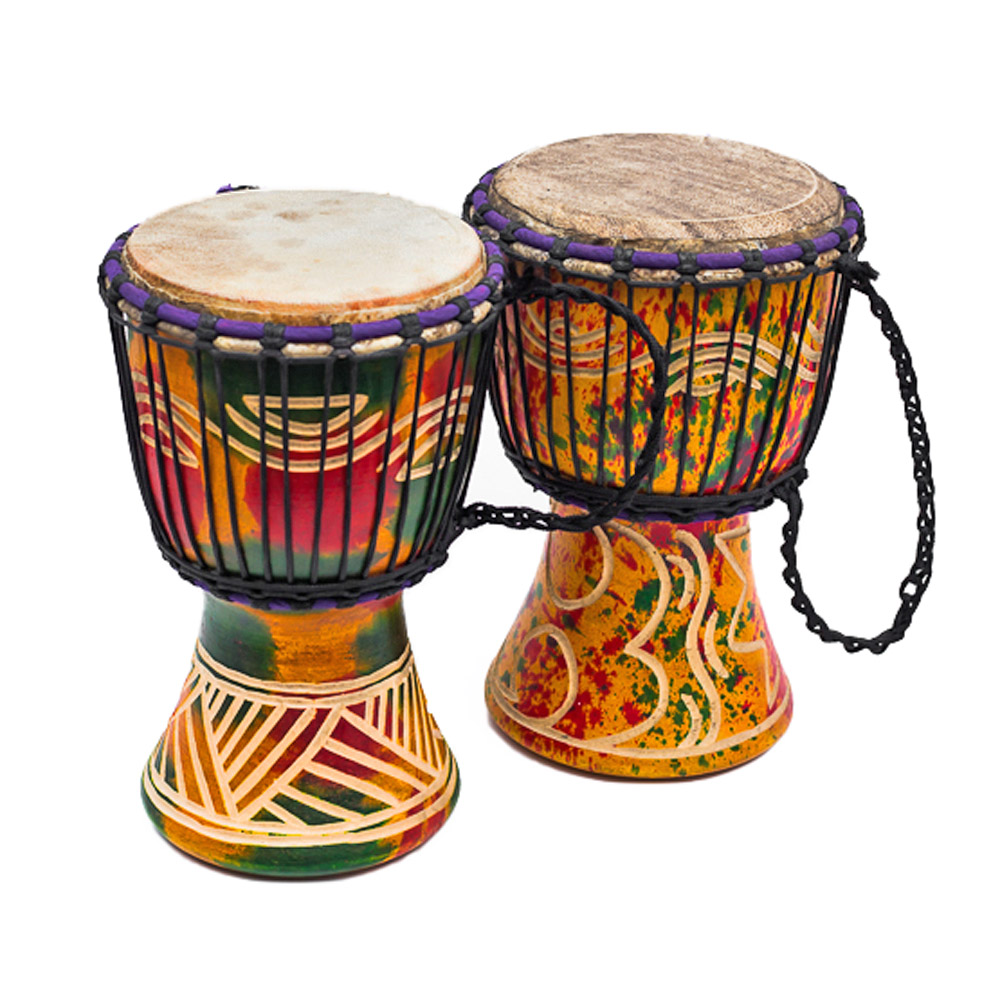 Djembe or Talking Drum
The talking drum dates as far back as 500 A.D where it served as the secret drums in major societies for the rite of passages, ancestral worship, rituals and social dances. According to the Bambara people in Mali, the name of the djembe comes from the saying “Anke djé, anke bé” which translates to “everyone gathers together in peace” and this name defines the drum’s purpose. In the Bambara language, “djé” is the verb for “gather” and “bé” translates as “peace.

It is believed that this drum contains three spirits. First, the spirit of the tree from which it was made. Then, the spirit of the animal whose skin is played, and the spirit of the carver or the one who cut the tree and the people who assemble the drum. Traditionally, only those born into the djembe family would be allowed (or interested) to play the djembe. This caste sings and perform during rituals, baptisms, weddings and sometimes funerals, and are trusted with the music of their ancestors.

Entenga
The Entenga drums were part of a set of royal instruments of the Buganda Kingdom in Uganda. According to Musisi, the last surviving drummer who played in the palace, the King loved the drums so much that he asked the drummers to play every morning at 3 am. He felt that the drums were so perfect, that this was the only time of the day when it was quiet enough to appreciate them fully. These drums have also been used to accompany traditional African religious activities like prayers, droughts, and removing evil spirits in the communities.

Ngoma
Ngoma (also called engoma or ng’oma or ingoma) are instruments used by certain Bantu populations of Africa. Ngoma gets its name from the Kongoword for “drum”. These drums are used in ceremonies in Central and South Africa, where the primary aim is to assist in healing during ceremonies. The rituals involve regular music and dance and can result in stress reduction, social support and support of pro-social behaviours. Ngoma usually serves as a means to unite the tribe and help in health or life transitions. The ngoma drum is also used in Zimbabwe, mainly for traditional dances and celebrations.

Gbedu
Gbedu means “big drum” and is an instrument traditionally used in ceremonial Yoruba music in Nigeria and Benin. The Gbedu drum is traditionally used on state occasions or during ceremonies of Ogboni, the ancient Yoruba secret society. The Gbedu, otherwise known as Ogido, is one of the four major families of Yoruba drums; the other families are the Dundun/Gangan or talking drum, the Batá drum and the Sakara drum. Each family includes drums of different sizes, with the mother drum (iya ilu) playing the lead role and other drums playing in support. Among the Yoruba, the Gbedu drum signifies royalty. In ceremonies such as the rite of Isagun, the Oba might dance to the music of the drum. If anyone else used the drum, they were arrested for sedition.

5 Foods Your Vagina Wants You To Take