Impact of Covid-19 on nutrition and food shortages in Nigeria

One of the major concerns across the globe is the impact of the Covid-19 pandemic on food security, as the United Nations World Food Program UNWFP warned that the number of people facing food insecurity may double by the end of the pandemic. Following the outbreak of the Covid-19 disease in Wuhan, China, and its widespread to many nations globally, a lot of countries have shut down their borders and restricted movement within to control the spread.

Though a grand measure to curb the spread, the national lockdown is having an economic effect that has led to tightening of credit access to farmers, limited access to inputs for farmers, limited access to transport services to transport food, and border closures limiting food imports. These constraints are beginning to have a ripple effect on food production and transportation, leading to a hike in food prices and limiting the population’s access to nutritious food.

There was already a shortage of food supply for Nigeria’s growing population even before the outbreak of Covid-19 in 2020. WHO  in 2018 reported that Nigeria is burdened by three key malnutrition indicators: anemia, overweight, and stunting. WHO further defined malnutrition as the deficiencies, excesses or imbalances in a person’s intake of energy and/or nutrients. Most often than not, the average Nigerian has misconstrued malnutrition to mean hunger, which however is an important predisposing factor to malnutrition.

In addition, the relatively poor performance of the agriculture sector in Nigeria has resulted in rising imports of food to cater to the need of the growing population of the nation. The nation faces gross food security challenges.

Since local production in the sector cannot meet the demands of the 200 million people in the country, augmenting with imported food has become a necessity. It is estimated that only about 100,000 tonnes of wheat are produced locally against an annual demand of over 3 million tones. The production of rice and fish which is highly consumed amongst Nigeria still falls below the quantity demanded. According to the NBS, between 2006 and the first half of 2019, Nigeria spent 38.24 billion Naira on agricultural goods import to augment domestic production. These goods include rice, sugar, wheat flour, fish, poultry, beef, milk, etc Despite the increase in rice production from an annual average of 7.1 million tons in 2013 and 2017 to 8.9 million tons in 2018, imported rice still finds its way to the country to feed the ever-growing population. With the closure of borders, it is only expected that the food supply for imported food will drop.

Locally, it is posited that the pandemic may also begin to impinge on food availability and supply. Speaking to one of the local farmers in Lagos State and an executive of the Amuwo Agric YES cooperative Agriculture Society Alhaja Badru, she lamented that she and her members have not been able to visit the farms since the lockdown, and even feared that hoodlums may begin to attack the little produce left on the land. In addition, restricted access to markets for farmers may also facilitate spoilage and wastage of highly perishable foods. She further explained that it’s currently a planting season for the wet season farmers across the country. Considering this information, and the restricted movement, agricultural experts have posited that shortage of labor, access to farming essentials such as fertilizer and seedlings will begin to affect productivity and consequently harvest in the long run.

Also from NBS statistics, the Consumer Price Index for most foods ranging from potatoes, yam, and other tubers, bread, to fruits and vegetables increased between March and April.

The People’s Experience
With the lockdown due to COVID-19, food prices have drastically increased in the states across Nigeria.  An interview with a residence of Abule-Ado, Mr. Abdulhafeez, in April 2020 further affirmed this information. Mr. Abdulhafeez informed us that a bowl of garri (1.3kg) which formally sells for 400 Naira is now being sold for 800 Naira ($2). Another residence and store owner in the area said that there has been an increase in the prices of foodstuff generally, and basic household needs such as milk, groundnut oil, and soup condiments. 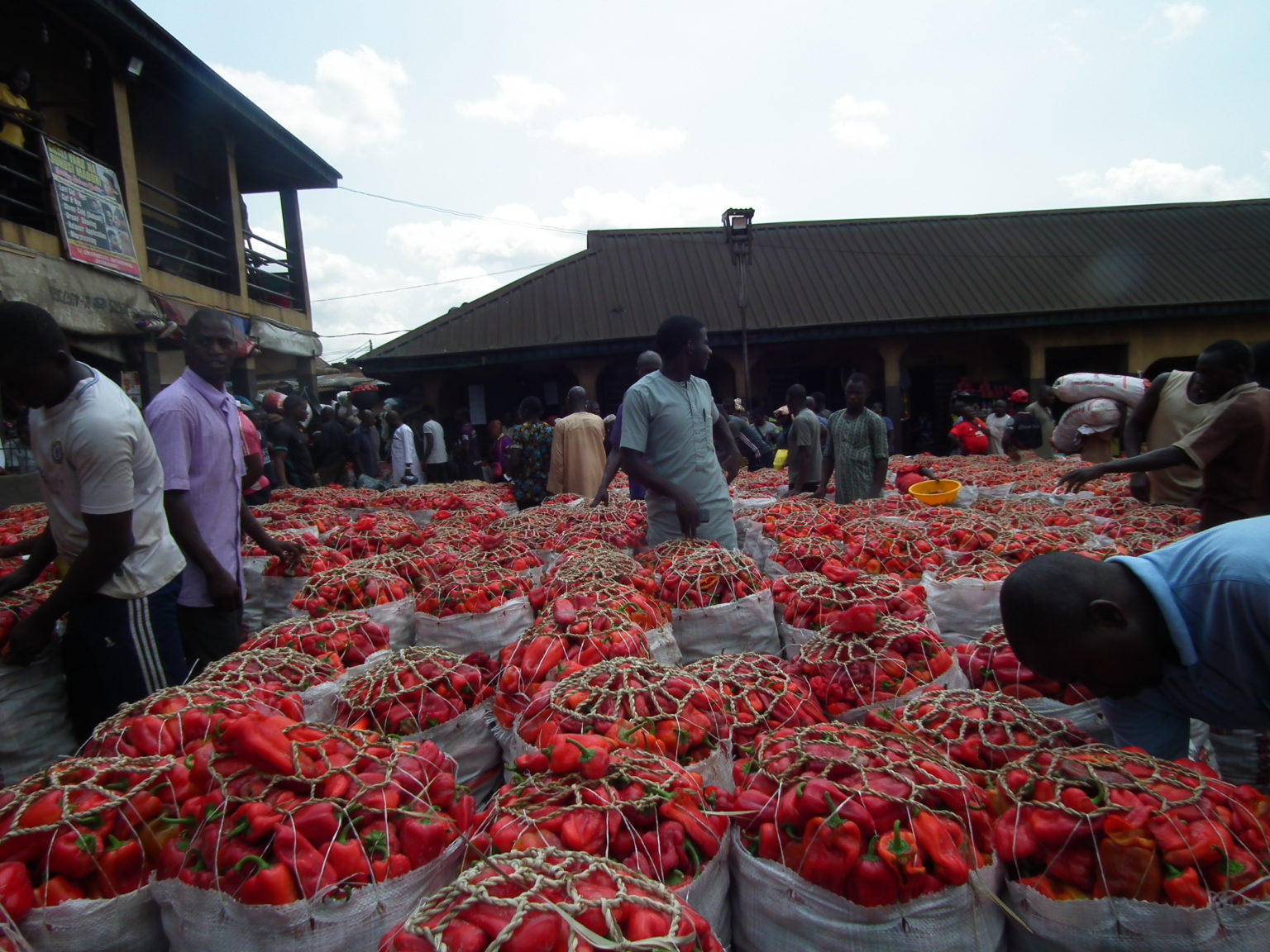 Ms. Haruna, a baker who lives at Berger,  lamented that the prices for baking ingredients and other essential commodities increased.  Going further,  she told us that the prices of icing sugar increased from 5,500naira to 7,100naira. Even pure water increased from 12 bags for 1,000naira to 11 bags for 1,300naira. This is really affecting my business and I don’t think there is any good reason for this increase, she said during the interview.

Rotimi Akindele and Seyi Ayanwole who lived at Abule Egba and Ipaja respectively had similar experiences with the hike in food prices and also transport fare to get the foodstuffs. For these reasons,  Rotimi said that he had to reconsider what was a priority for him. He explained that since having food in his stomach was most important, he decided to get foodstuff he could afford and skip consumption of fruits and some foods he considered to be luxury at the moment. Checking the quantity and quality of his food consumption was his mitigation plan

Mr. Adeyemi, a resident of Dopemu said he now spends double his usual family budget on foodstuffs. Mr.  Adeyemi who has too little choices had to pay the exorbitant prices and wondered just how long Nigerians could keep up with this.

The drastic hike on food prices coupled with a reduced supply of imported food is a big strain on food consumption on Nigerians.

Impact on Nutrition
Nigeria still remains one of the worst-hit by malnutrition in the Sub Saharan region, with children and women in their reproductive age most affected.   The 2018 NBS      Demographic Health Survey revealed that 37% of children under age are stunted, 17% severely stunted and 7% wasted. 22% are underweight and 7% are severely underweight.

The situation has placed a need on all relevant Ministry, Department, and Agencies to delve into the issue of malnutrition in Nigeria and intervene accordingly.

In 2017, the head of the Nutrition Division, Federal Ministry of Health Chris Isokpunw projected that the country needs N279,536 billion naira ($912million) to address malnutrition in all states in five years.  A Flourish chart

In spite of this, the budgetary allocation for health still remains low, and is, in fact, a far cry from the 15% recommendation of the World Health Organization and specifically spending on nutrition is far from the National Strategic Plan of Action which assumes that the Federal Government will provide ten million dollars annually. In 2017 and 2018, only 2.3 billion Naira ($5.9million) was allocated in the national budget for nutrition. In major states like Lagos and Kano, spendings projected for nutrition interventions constitutes less than 1% of the total annual budget, and per person, the budget falls less than a dollar.

With the pandemic, it is anticipated that the allocation to nutrition intervention will further reduce with resources directed at other activities such as the purchase of test kits, Personal Protection Equipment (PPE), hazard allowance for frontline officers, etc. to combat the pandemic. Unfortunately, the malnourished populations are more vulnerable to the COVID-19 virus.

What is the impact on current Interventions in Nigeria
According to World Bank statistics, 66 million school children go to school hungry every day. In Nigeria, about 2million children suffer from acute malnutrition and the nation has the second highest burden of stunted growth in the world. It is against this backdrop that the school feeding program was developed to ease the percentage. The program whose objectives include providing food for children, especially the required dietary intake, has served over 8.6 million Nigerian Children. Thirty states have currently joined this program, including the Lagos State government who joined January this year.

With the pandemic, the program which benefits a total of 774 public schools in Lagos state has been suspended due to the closure of schools. This has saddled the benefitting parents, especially low-income earners, with an increased responsibility to provide for these children. For those who cannot, the children would most likely have to go through the scourge of hunger and malnourishment until the pandemic is over putting them at greater risk of contracting and falling ill from  Covid-19.

What can be done to address Food Shortage and curb Malnutrition?
Presently, it is important that the Nigerian government put in place measures to strengthen local food production and supply and in turn moderate the cost of food.

Beyond the pandemic, the Nigerian government must understand that Malnutrition is a scourge that requires essential proactive measures.

The huge impact of malnutrition transcends the human physical health to mental health, which consequently could affect the productivity and economic gains of the nation. Several pieces of research have equally established a link between malnutrition, and a predisposition to infectious diseases as well as noncommunicable diseases such as obesity, osteoporosis, type 2 diabetes, and even cancer. With the alarming data on Nigerian’s malnutrition, it is only important that the proactive measures are quickened, and existing plans are strengthened.

Such measures include the inclusion and empowerment of young people to boost local production, increased use of arable land, and commercialization of agriculture. Other foundational and more tangible measures would also include a good understanding of malnutrition problems by states through thorough research for qualitative and quantitative data. This would enable an informed strategy on addressing the problems of malnutrition, especially as regards bridging gaps between the present situation and the ideal situation.  It is also imperative that the government harnesses existing financial opportunities at the global level and also seeks local financing for action plans. In line with this, a deliberate effort to increase internal finances budgeted and spent on nutrition must be made and sustained.  Strong development communication is also important for, and between farmers and relevant stakeholders for effective diagnosis and implementation of intervention strategy.

"I've been the first and only African American to work with all my clients," says Stephen Burks