Hair sculpture artist and Ivorian self-crowned goddess Laetitia Ky creates art that comments on social issues such as mental health and gender equality. Nickita Maesela chats to her about her work and her journey to becoming an Instagram artist.

Artist, model and aspiring actress Laetitia Ky considers herself a feminist activist. Using an African feminist artistic lens, she draws attention to the power of black women’s hair and bodies in a world that spins on an antiblack axis in terms of beauty ideas.

“Once I have the idea, I draw it, but only when there is a lot of detail. For designs with less detail, I just visualise the thing and I’m good,” she tells #Trending via a Zoom interview.

Ky says her main tools are her dreadlocks, hair extensions, thread, wire, scissors and a needle. “Depending on the hairstyle, I will generally take between 20 minutes and two hours to create the work. And after I finish, I’ll take my own photos with my camera – using my tripod if it’s indoors. My sister will help me when I want to shoot outside.”

The 24-year-old artist, who was born in the Ivory Coast, aims to highlight gender inequality through the positive representation of black women on online platforms such as Instagram. Ky’s work is a visual contribution to the global conversation on black women’s hair. The debate continues to spark criticism of the normalised and widespread colonial gaze on black women’s bodies and bodily autonomy.“Once I have the idea, I draw it, but only when there is a lot of detail. For designs with less detail, I just visualise the thing and I’m goodLaetitia Ky

“I’ve experimented with my hair since I was a kid. I used to braid my doll’s hair and my sister’s when I was five years old. But it was in 2012 when I finally saw hair as a way to express myself – which was when I went natural.”

She says she learnt to love her natural hair, which made her fall more deeply in love with a more African aesthetic. That is so far from what we have been fed through the mainstream representations of beauty and feminine constructs that are fully loaded with Eurocentric ideas. In 2016 the hair artist saw a beautiful image of an African woman with an incredible hairstyle. “I was amazed by it all. It made me want to start experimenting with my braids. This is the only hairstyle that I wear now,” she says.slide 1 of 1 This catalysed the start of the hair artist’s career. She started posting simple designs that generated a lot of support. “Each photo [on Instagram] would get more and more likes and shares, which was encouraging. So I kept making more complicated works.”

When she started receiving messages from black women saying that because of her they felt better about their hair, skin and heritage, she realised the power and impact her art could have. “I decided from that moment to do cool shapes not only for fun, but also to share messages that were important to me.”

In December 2018 she focused on mental health awareness through a visual depiction of “the voice in your head”.slide 1 of 1 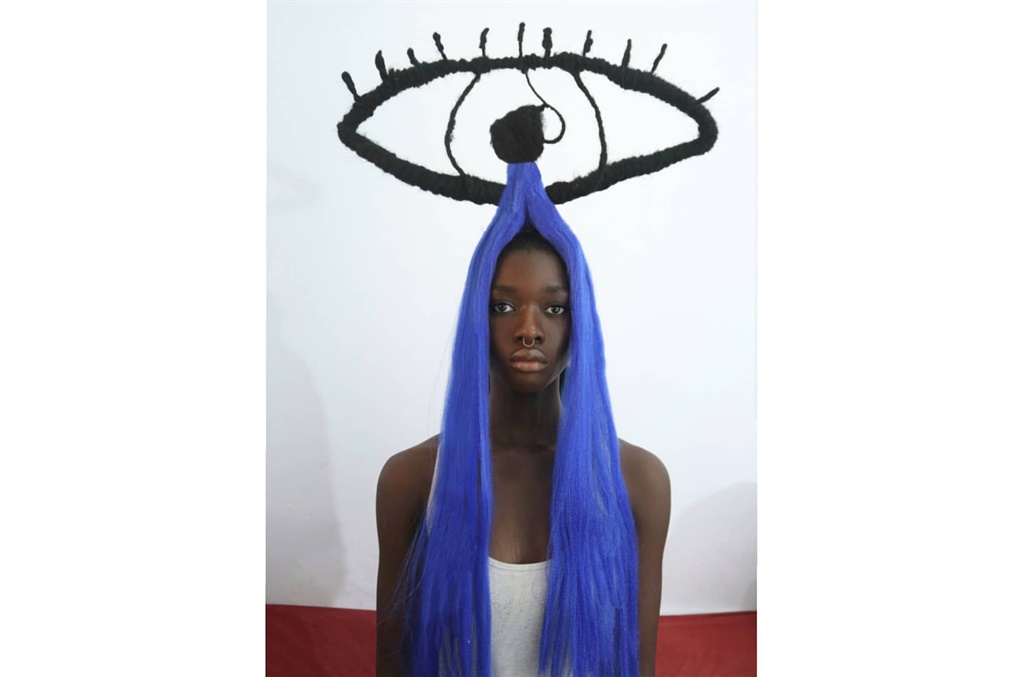 “Unfortunately, in Africa it [mental health] is generally an extremely neglected issue,” she captioned the image. “People don’t view anxiety and depression as diseases. The victims are considered weak-minded, yet it is something serious that can destroy a life. “I personally struggle with chronic anxiety and I created this piece while I was in a crisis.”

On February 6, Ky posted a piece for the UN’s International Day of Zero Tolerance for Female Genital Mutilation. She highlighted the oppressive realities of this practice by styling her hair into a clitoris sculpture to celebrate her s